Fatherhood - When a Boy becomes a Man...

Yesterday was one of the (rare) days which I practically like all my friends' FB posts. Most (if not all) of those I liked were posts on appreciating their partners and/or fathers for being fathers. But I realized with each "like" I clicked, I was more so congratulating their wives on a successful marriage and partnership.

When D and I were dating, we talked about the future of us having a family (like who doesn't) but our discussion surrounded more around how to provide for them and how many kids (somehow, for this, we never really settled on a number…) It was only when we had kids, did we see the side of each other that we won't see when we are dating.

Like how D talks to the children, is totally different from how he talks to me.
To me, he can be (and is) comfortable, to them, he is protective and smitten (rolls eyes).

Or what we will do for our kids...
Like recently, Audrey woke up at 2a.m with bad tummy ache. She was having constipation (she actually didn't poo for 3 days and we left it as that). She had to go to the toilet but she thought it was too painful to poo it out (trust me it was like watching your daughter go into labour). Despite having medical training, he wasn't sure how to help her… and he felt quite awkward seeing her like that. So I sat with her and gave her water, massage her back and made her poo. After 1 hour, whatever was stuck finally came out. After bathing her, D was very grateful and actually thanked me for it (like really?) He confessed he won't know what to do if it was just him. (In case you are wondering, Audrey now poos once a day)
But when the children were babies and had problem discharging their mucus from their nose, D would suck it out with his mouth (and of course he spits it out) BUT I don't think I can ever do that…. Like… ever. (To be fair… I know many dads who have done so.. and mothers who are grateful that the dads have done so)

Or what we worry for our kids…
Like how I would worry they won't be able to cope in school and if they are being a menace in school… and how D will… not worry. (Should I be worried??) Contrary to me, he would be damn proud if his kid was a bully rather than being bullied (Should i really be worried???) BUT the mister can worry about which boy will be taking his daughter out while I'm like… she's only 6?

But both of us play a very different role in our children's lives. I personally learnt that growing up…
My dad was an air steward when I was a child and possibly because of that (and other reasons), I didn't really have much of a memory of him being around. Most of the time, my mum was the one who tried to play both roles of mum and dad. I know she was trying very hard and I know she loves me real lot, to be fair both my parents do, but I suppose a father's role isn't one that can be replaced by the other parent, and vice-versa.
Growing up, my most intimate times of heartaches (like when I broke up with my ex), my highlights of success (like when I aced my exams/interviews) or even the problems I faced when working was always straight to mummy. But I have to say, games I played growing up (like how dad and I played hide and seek when mummy cooked), magic tricks I learnt (I reckon every father has that silly hiding a coin game which will suddenly appear behind your ear or elbow), sitting on thrill rides in a theme park (mummy thinks that life's too short to scare yourself for nothing), early morning rides from home to school (because mummy thinks if the sun is not out, it's nature's way to tell people to continue sleeping) and many more were enriched because of dad.

I don't think I could ever raise my kids without D… I mean, unless he dies, I would reckon it would be really tough… But it would be different. A father and a mother aren't just gender roles that society deems suitable and appropriate to bring up a family. And many a time, because of women's rights and gender equality we tend to forget these two compliments each other more than anything.

I'm grateful to D for teaching the boys how to love, protect and treat with respect the woman he married, and yet teach Audrey, that she is worthy to be treated like a lady from the man she will love in future.
I'm grateful to D for being able to handle the pressure and stress of providing for the family so that I can concentrate on just looking after the family's meals, disciplining the kids and schoolwork and even sneak in things I would want to do at times.
I'm grateful to D for making parenthood enjoyable. For being my support and my anchor when I have doubts on motherhood.

Maybe because of their limited daily vocab usage, dads hardly teach their children how to live their lives, but their decisions and actions in life show their kids how to do so.
So to the fathers out there… May you always be blessed with a Father's day moment of appreciation, to know that what you do makes a lot of difference to your kids and more importantly your wife. :) 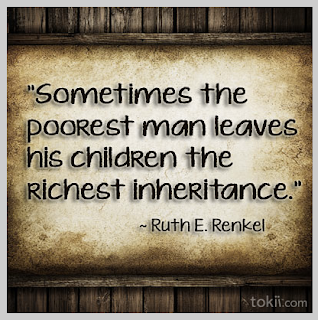 Posted by Chellespeaks at 9:06 PM