And so, today's entry revisits my 'love-hate' relationship with P1 Math.

For the past month, I have been revising Math with Isaac and I found that one of the concepts that he seems to be struggling with is this concept of "How many more/fewer?"

You see, throughout the last month, Isaac has been having problems getting it right. Actually, I looked back when Audrey was in P1 and she too had the same problem. It may well be a usual developmental 'kink' that most kids need to overcome, but that would not bring any form of consolation when the parent teaches this to the kid.

We sat through many other practices and he will not be able to get these type of questions right.
Trust me, I actually been through 3 different methods.
Method 1: Crossing the items from each group and asking to count what was not crossed out.
Result: He crossed them out (though I think he didn't understand why he needed to) and still didn't help. In fact the next time when he saw a similar question, he didn't cross anything out.

Method 2 (similar to the first): Matching and partnering each object from the two groups to form an unit.
Result: Same as the above.

Method 3: Just subtract one from the other. (Obviously, I'm getting desperate and wanted him to just get the answer)
Result: He was not able to carry it out when he saw such a question again.

As an adult, you may not have any problems getting this. But a seven year old may. If most 7 year olds go through this like what Kathy Richardson's "How Children Learn Number Concepts" is saying, that what children is understanding from this type of question is how much is the number that has fewer, rather than how many fewer. 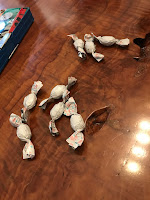 On a side note, I have to say that Isaac has no problem with simple subtraction. So 5-2 is manageable for him.
Now, based on Kathy Richardson, such a question could really be because of language rather than concept.

So this is what I did. I took 5 sweets in one group and put 3 in the other.
Step 1: Check whether the child even knows which has more. (Isaac knew… phew)
Step 2: Ask the child how many more sweets must you put in the other group to make both the same. (EUREKA… ok at least for Isaac)

Now of course if the group asks for fewer, then you may have to change the questioning a little. So…
Step 1: Check whether the child knows which has less.
Step 2: Ask the child how many sweets you must remove from the other group to make both the same.

Try it for a few more examples. But try not to give one example which has the same answer as the number of items in the group.
So for example, Group A has 8 girls. Group B has 4 boys. How many fewer boys are there? The problem with this is you really cannot catch whether they got the concept or they were just giving you the number in the group that has the fewer items.

With that, now I explained that Math had a special language and in order to find those answers, the lingo in Math would be to ask "How many more/fewer?" (Which obviously was BS, but it doesn't matter) 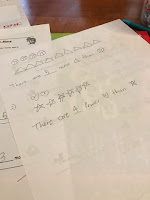 And it really doesn't because Isaac now was able to use that knowledge and answer these type of questions correctly. I found some other practice worksheets online and printed out to let him try… and he had NO problem. In fact, he was very confident and he managed to solve all within minutes.

You can't believe how wide my smile was when I saw his answers. (To be fair, I'm not sure if I was prouder of him or myself :P) But HE was also beaming with pride.

Regardless, let me know if you have tried this and your child had his Eureka moment too. Or better still, if you have any ways or methods you have tried and it worked, I would be really happy to learn from you! :) Otherwise, onward to P1 Math!
Posted by Chellespeaks at 5:52 AM