Till we meet again, Philip 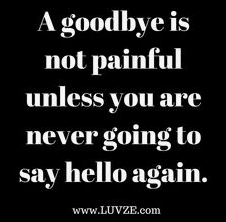 Two months ago, we discovered a lump in Philip's abdomen. Initially the doctors thought that it was the typical Wilm's tumor and assured us that his chance for recovery would be 98%.

Unfortunately, when they removed it, they found it to be a rare and malignant tumor called Rabdhoid Tumor. They had measured it to be 10cm long and told us then that we were looking at a 20-40% chance of success with chemotherapy and radiotherapy.

The next day they did a full body scan and found another 1cm tumor next to his brain stem. He needed to undergo another surgery two weeks later to remove that tumor but now his chance of success with chemotherapy would drop to 8% or less.
Just after 3 weeks from the second surgery, we felt another lump at his back. We went back to the Doctors and the ultrasound scan showed that the 10cm tumor which we had removed had returned and grown to 5cm. The scan also showed that the cancer has now spread to his liver. A week ago, Philip woke up coughing and wheezing in the middle of the night and we rushed him down to the hospital. They did a chest x-ray and found a 2.5cm tumor in his left lung.

I have thus far mentioned only all the bad news. Where is the Good news in all this then? For one, from now on, no one will dare to ask us if we are going to have another baby. (And yes after 5 kids, they still ask us to try for more kids.... I also don't know why)
But more importantly, the good news which I had learnt were all inspired by Philip.

After his first surgery, Philip needed to take medications orally. Not all of them tasted nice, but Philip would obediently take them whenever it is time. The teenager boy opposite him on the other hand would refuse his medication and just take them when he decides them to. Growing up makes us more independent but with that we choose to be our own God. We decide it's our time, our way and our life, we tell others that we don't need their help and with the little that we know, we put others down and refuse to listen to them.
Philip didn't. He didn't understand what was going on, but he just did what he was asked to do whether he liked it or not.

Philip did suffer the last two months. With each major surgery that he went through, he came out from the operating theatre with many tubes, needed to be suctioned at times and at many times, he needed to be poked. But when he had recovered and had felt better, he was ever ready to offer a smile even to the same nurse who had poked him not long ago.
Philip had put us adults to shame. When we had to go through something bad, we always choose to hang on to the pain. It was as if that pain was our justification to remain angry, to get another person's pity and attention and to make their lives miserable. Philip moved on, he cried when he was in pain, but he smiled too when things have improved. We, on the other hand, choose stay upset and cling on to our pains even when there was a reason to smile.

Make no mistake, Philip had really wanted to hang around and stay with us. Even at his deathbed, when his pulse slipped to 20, he had tried to climb it back to 120 twice before he gave up. Growing up screws us up real bad. We see the world with negativity and lose the meaning in life. We choose to give up and think that life can only be better if and when we go to the next world. While there was nothing wrong with heaven, Philip didn't see anything wrong being on earth. And honestly, what is so wrong and bad being here?

Philip had some difficulties peeing and pooping the last few days before his death. We were praying very hard and even encouraged him to pee at least, so that his abdomen wouldn't be so tight. Just half an hour before he died, he did it. It was as if he told God he needed to do this before he died because he needed us to know that he had heard our encouragement and more importantly God had heard our prayers. 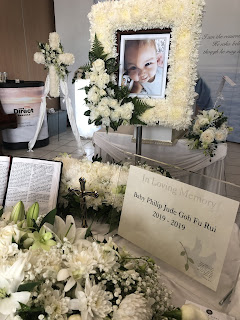 A friend asked me recently at the wake what did I learn from the whole episode. I told her I learnt that in the past two months, faith aside, what carried me through was someone had offered us hope, like the doctor who respected and agreeable to our choice treatment. The result might have been the same but at least she helped us hope for a miracle.

Thank you sweetheart for choosing me to be your mummy. You were the gift in my life to teach me my life's mission - to give hope to someone else. Hope, faith, love and joy are very simple gifts that all of us have in us, yet because we "grew" up, we choose to downplay and devalue them.
We still feel the pain of the physical loss of Philip, but the hope that there's something to look forward to tomorrow, helps us through.

May all of you, choose to find the gifts in you and be the gift to those around you. I assure you, that's when you will find Good News.

Posted by Chellespeaks at 6:47 PM