I remembered that she lost her wallet on the first day of school. I didn't know she lost it until at night when I asked for it. She didn't know where she lost it, how much she had inside and didn't feel bad losing it. (Winner.)

Knowing me, that was definitely not going to sit well with me. First, I didn't like the fact that she was completely nonchalant about it. Second, she didn't even tell me until I asked for it. I could have easily given her another wallet, but I didn't. Yes, she's my child but that doesn't mean that she needs not be responsible of the things given to her.

As a result, I placed her pocket money in a small ziplock bag. I could tell that she definitely felt the consequence of not looking after her things. The next day, she came home with her pocket money - in her ziplock bag.
The following day when she came home, her ziplock bag had a tear. I saw it, but I kept quiet. Audrey asked that night if she could use a wallet instead, before I could say anything else, she told me she will not lose her wallet. I agreed and till now, she still has her wallet with her. (Well done girl!)

D felt I had been too harsh with her. He felt that I should have told her the importance of looking after her stuff rather than just going straight to a plastic bag as a wallet. My argument was the fact that she was unconcerned about losing the wallet, and not the act of losing it.
However, because I was the one who disciplined her, D decided not to overrule that.

In the middle of the term, Audrey came home with her Math workbook. Parents are required to sign it as a form of mid term review. She generally has gotten all her work correct, except some of it was done untidily. Her numbers were big and unsightly. Though it was marked, I told her to erase her work and redo it - neatly. I have seen her work before and she is capable of neat work. I emailed the teacher and told her to not accept any work from Audrey if it was ever done untidily. (The teacher must be thinking what's wrong with me…) Since then apparently her teacher told me her work has improved.
My rationale is that if she can do it before, she is definitely capable of doing it again and no one should discount it.

Time passed quickly and very soon it will be the first term's holidays. Audrey enjoys school life so far. Her usual recess meals are either sushi (mainly) or noodle soup. Out of the $2 ($0.40 goes to savings and tithings) she is given, she only spends $0.60-$0.80 a day. (She saves the rest when she comes home) Her "best" friend is Annabelle. Given her height, she is still second in class. (Like how is it possible you think… well… It is). She enjoys her netballs on Thursdays (I still don't understand why I had to pay $80 for this CCA for the whole year). 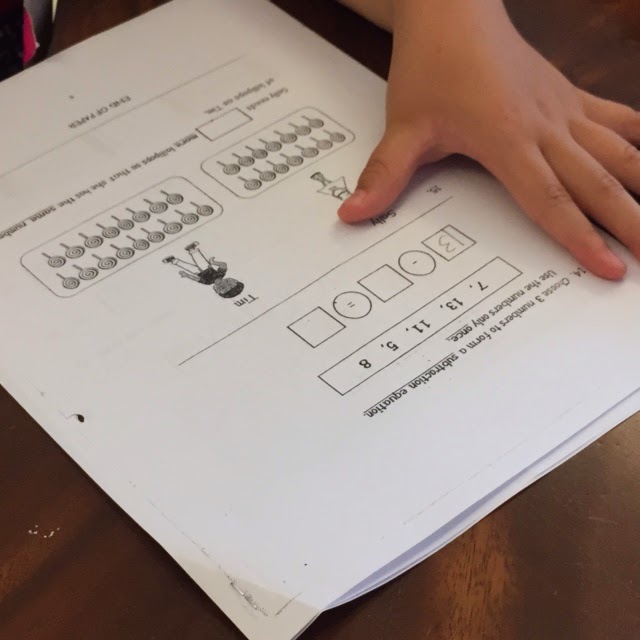 Most days, when she comes home, she sits down 2 hours with me doing either English, Math or Chinese papers. (Yes it's only term 1, but she's not complaining… and I really don't see how it's different from putting her in tuition classes like berries or enrichments). I am proud that she can sit, without procrastinating, and finish her work. (I tell her this too… and all she did was smile widely) At least, I take ownership and make the effort to sit with her as well.
Of course, again, different parents have different believes in this and maybe I am a tiger mum… So I guess different parents would have different views on it.

I am sure Audrey is looking forward to the holidays, which we planned for a staycation and all. After all, all work and no play makes Jack (in this case Audrey) a dull boy (girl).

Let's hope that when it comes to the boys, I won't be strangling myself...
Posted by Chellespeaks at 5:12 AM