An hour at East Coast Park

So yesterday D & I thought we should bring the kids out in the late afternoon since we wanted to tire them out for bedtime. (The children normally go to bed at 8p.m. to prepare for school tomorrow)

We had wanted to bring them for kite flying and thought that there would be some for sale at East Coast Park, but we were wrong. They sold frisbees, balls, bicycles, roller-blades, slippers, anything but kites. (Why not?) So we did what half the families in ECP did - rent a family bike. (on a separate note, the only way to get a kite now seems to from online shops….)

The bike rental was $40/hr and wasn't exactly the cheapest thing in ECP, but for a family of 5, it's not a very expensive activity for 1 hour. 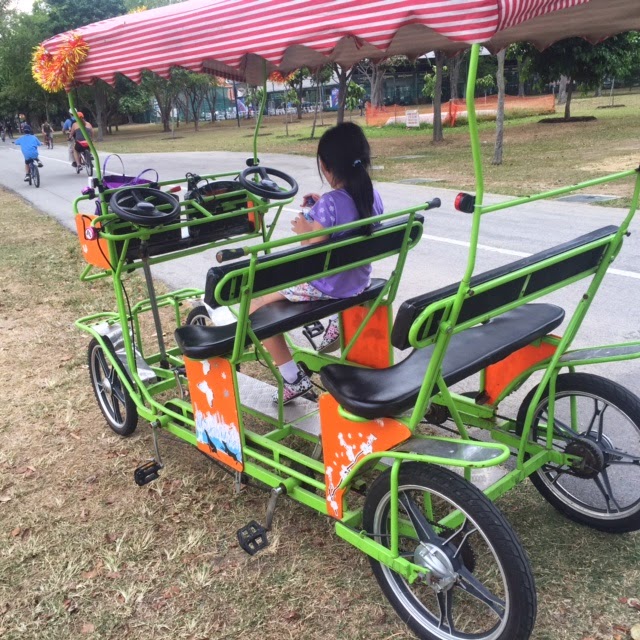 These bikes have 4 pedals (but for our case, only 2 pairs were used). Audrey sat in front with daddy, Julian sat in between them, while Isaac sat at the back with me. Everyone started to pedal at the beginning. Isaac couldn't reach the pedals, so it started with 3 cyclists. 10 minutes into the activity, D asked if anyone was tired. "No!" said Isaac… like why would he be when he was just being cycled all the way….
D on the other hand was regretting, he thought we had cycled for some time, until he found out that it was just 10 minutes. I understand, because I was feeling that too… and I was wondering how to last through the remaining 50 min (Not that misery loves company but you guys should try when you are free…)

If you frequent ECP, you will notice their paths are continuously straight… Which means, we had to continuously cycle until the road was wide enough for us to make our 4 point turn.. (which is at least a 25 min cycle from where we started). It wasn't a glam thing as well, D had to get down to maneuver it while I pedaled.

On the way back, we went through this small path called Cicada garden. (Mistake… Big mistake) it was uphill… and from afar it seemed harmless. Halfway through, D had to come down and push the bike from the back, Audrey was tired, the boys were all just taking in the scenery… and i had to pedal… myself. It was like cycling on the gym bike with maximum resistance!
Fortunately, what goes up, must come down, and so we did… but because it was a short uphill… (it didn't feel short when we were cycling) downhill was short too… zzz

The cycle back was slower though… because now the adults are the ones cycling. We returned the family bike after 45 minutes (I am pretty sure we are not the only family who didn't make full use of it though) That 45 min made me appreciate motor engines. :)

The kids enjoyed themselves, we did too. We brought them joy… but guess the kids never knew how much more joy they brought us. :)

Posted by Chellespeaks at 2:29 AM