When a Picture says More than a Thousand words

The school term has started and so has my revision time with the kids.
Looking at last term's work, I wanted to do addition word problems with Audrey.
This week, instead of eggs, let me introduce our new character - Gingerbread Men!


This (thank God) is not a question from Audrey's test, it's one of the questions we went through today.
To be fair, this is not a difficult question. I am sure suspect when teachers teach such questions, they would basically highlight the words "at first"and explain to them that it means finding out the number of items at the beginning. To do so, it would mean to add what is left and and is missing.

But here's what my dear girl did… 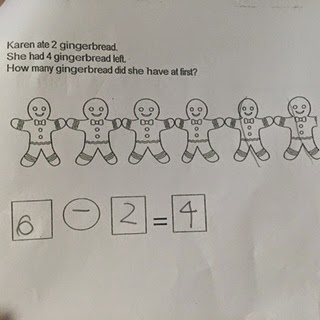 I'm not sure if you can see, but she struck 2 gingerbread men from the picture, and wrote as 6-2=4. (I don't even know to mark right or wrong)
After the egg incident, I have learnt it is more important (especially for kids) to understand rather than to be understood.
I asked her what made her do this way and here's her explanation:

There were 6 gingerbread men (Like why did they even draw that out?)
4 gingerbread were left.
So… She thought her working was supposed to be 6 - 2 = 4.
(I checked with D and he gave the same explanation as to why she could have done this way. Brilliant! My daughter is going to be a dentist too!)
I thanked her for teaching me something new and told her to take a break, since we would be continuing after dinner.

I tried to ask some friends whose kids are in Primary 1 to let their child try the above question. Basically I wanted to understand if their kids got it right or wrong, and if they did was it because they read the question or looked at the picture.

So one of my girlfriends got her daughter to try and she got it right. I asked did she solve it by reading the question or looking at the picture. She told me the former. She didn't even bother with the pictures.
Another two did the same thing as my girl… (okay now we got 2 more dentists!)

My concern, at this point, wasn't Audrey's train of thought. I was worried. Worried that she would not be able to proceed on questions when it didn't have any pictures (misleading or otherwise) and more importantly, that she will not be able to fit into what the system wants of her.

After dinner, I got her to redo the question again, this time, I covered the picture. I asked her to solve the question for me.
So I covered the pictures and she got the right answer. (did you know how loud my sigh of relief was????) I know why schools needed to provide pictures for word problems - for the consideration of other students who can't read.
However, through this one incident, I am not sure if the use of the pictures here has made matters worse. Or rather, the use of pictures has indirectly led to a failure of showing her concept understanding here.

1) Word problems should henceforth not have pictures?
2) If the child can't read, they shouldn't be given word problems?

It's sad that a good intention (picture in this case) didn't produce a good result.
Honestly, if I didn't have this incident with Audrey, I won't have known better as well. (Because I read the question instead of looking at the picture)
And if i were in the school management team, I won't have known that kids may be confused by the pictures and/or whether pictures should be drawn for word problems.
But instead of being critical of what has been done, I hope this post entry would create an opportunity to discuss on what could be done… after all, at some point, chances are your child will be going through the same education as mine.
So I'm posing to you readers, IF you were the setter, what can you do differently?

I do hope you share your thoughts on this… if not, I hope, this will help you further understand how a normal 7 year old think. :)


added note: my friend told me that it's probably easier to let audrey learn how to give answers people want.. Maybe.. but I would also hope that from this post, people would also learn to accept what answers my child (and many other children give) because of the little things we as adults overlook. Will it change overnight, no. But will that make a difference to what you do with a child like this? Maybe… :)

Posted by Chellespeaks at 6:36 AM